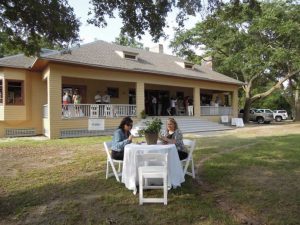 The 2014 Award goes to the Charnley-Norwood House, Ocean Springs, Mississippi.

The restoration of the historic Charnley-Norwood House in the wake of Hurricane Katrina represents the best of preservation practice and sets a standard for the careful recording of building material and form.

One of two vacation houses designed by Louis Sullivan and Frank Lloyd Wright in Ocean Springs, the Charnley-Norwood House survived the hurricane’s fury. Katrina was not the first disaster to strike the house. Originally built in 1890 for a Chicago-based lumber baron named James Charnley, the house burned and was rebuilt for another Chicagoan, Frederick Norwood, by 1897.

The vacation house is shaped by characteristics of modern designs for residential architecture, including the open floor plan that allowed interior spaces to flow into one another and the horizontal emphasis of the overall building form. Sullivan and Wright designed the house to “invite the outside to come indoors.”

The 2005 hurricane gave new meanings to this ethos, washing though the house and lifting it from its foundations. The Mississippi Department of Archives and History (MDAH), together with the National Trust, the Frank Lloyd Wright Conservancy and other stakeholders, prevented demolition of the house. MDAH oversaw the emergency stabilization in 2009. Then began the two-year research and documentary effort. In 2011 the Mississippi Department of Marine Resources acquired the house and, with the MDAH, launched a restoration campaign that returned the Charnley-Norwood House to its circa 1900 appearance.

On behalf of SESAH, the awards committee is honored to recognize a collaborative effort in rescue, research, and restoration that is as commendable as the landmark’s design collaboration between Sullivan and Wright and one that is truly the Best of the South.

Established in 2006, SESAH’s annual Best of the South (BOTS): Preserving Southern Architecture Award honors a project that preserves or restores an historic building, or complex of buildings, in an outstanding manner and that demonstrates excellence in research, technique, and documentation.
Tags: Charnley-Norwood House, Katrina, Mississippi, Ocean Springs