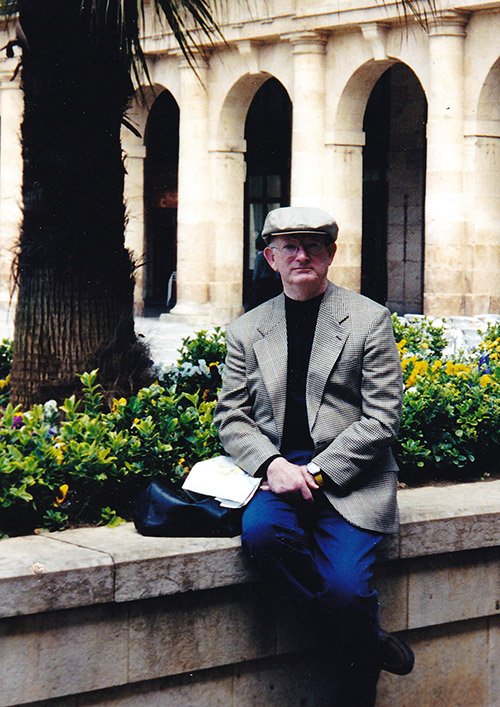 During our recent New Orleans conference I learned of the passing of C. Murray Smart, former dean of the Fay Jones School of Architecture and Design at the University of Arkansas.   I missed seeing him at our SESAH meeting, knew he had not been well, and inquired of a colleague whom I had not seen since the Fayetteville meeting a year ago.  “We lost Murray,” she said simply, and we both were immediately close to tears.  Her message and the expression on her face reflected so much more than merely the sharing of news, however sad.  We both understood Murray was far more than a close colleague and friend; he would be dearly missed, and his circle is wide.

I first met Murray at an annual conference of the Nineteenth Century Studies Association (NCSA). We shared an interest in 19th century English architecture: I was reading John Ruskin and William Morris and studying the Arts and Crafts Movement; he was studying Victorian churches and stained glass, and I would soon become aware of his book Muscular Gothic and his continuing study of glass.  I learned he was the dean of an architecture school, and we have many times laughed at my intemperate reaction to that news: “My God, a dean who’s a scholar as well? Who’d a thunk.”

At that NCSA meeting, Murray and I spoke of SESAH which had been founded in Atlanta a few years earlier.   He was immediately interested to learn that a “local” chapter of the Society of Architectural Historians was indeed regional, and he asked what steps would be needed in order to bring Arkansas into the fold.  What followed was the most professional state-sponsored “application” to join SESAH imaginable: documentation with signatures of Arkansas scholars showing a statewide interest in formalizing the affiliation, further expression of interest in the form of offering to host a SESAH conference in Arkansas, and affidavits from individuals ready and willing to serve the society. Arkansas joined SESAH in 1986, but my Victorian scholar/friend was just warming up.  At Murray’s encouragement, his son provided pro bono  legal services to secure SESAH’s tax exempt status and to incorporate the society in the state of Arkansas.  After a first year without an Arkansas board member, Murray stepped forward to become his state’s first representative (1988-90) on the SESAH board of directors, and thereafter the board has benefited from the participation of leading Arkansas scholars: Cyrus Sutherland, Randall Ott, Graham (Jeff) Shannon, and Kim Sexton.  Murray was elected president of SESAH n 1991, his colleague Ethel Goodstein-Murphree was elected president three years later, and Arkansas hosted SESAH conferences in 1989 (joint with SECAC in Little Rock), 1998, and 2014, the latter two in Fayetteville.

It was during that 2014 Fayetteville meeting that I saw Murray for the last time, seeking him out at SESAH’s keynote address for a brief hello.  On that occasion I came to understand more fully how beloved he was in his home community.  He had almost casually informed me much earlier that he was recovering from brain surgery, had retired some years ago but was still teaching a course or two. His cherished school of architecture was always central to his professional life.   At the Fayetteville conference, Murray made a concerted effort to join the audience at SESAH’s  keynote address from Gwendolyn Wright, and when it was announced that Murray was in the audience,  an explosion of applause burst forth from an audience who clearly loved this man.  You can tell what is perfunctory and what is boundless, and the audience’s express of joy from knowing Murray was amongst them simply rebounded off the lecture hall’s walls.  Murray was their teacher, standing heads above a community of truly talented scholars and award winning professors. Murray Smart was special, and everyone in that hall knew it.

As I sat there, I thought back to those years when I was first rubbing elbows with a “dean” whom I had just met, but whose kindred spirit and whose professional interests in common I have enjoyed of several decades since.  I had traveled to Wales to look at William Burgess interiors in Cardiff, because Murray’s book had encouraged me to take first hand look at a 19th century decorative artist and architect that I knew only causally.  I found myself in obscure locales in rural Gloucestershire, delighting in the High Victorian Gothic interior of Holy Innocents Highnam, recognizing I would not have known about this extraordinary church were it not for Murray.  I, too, was his student, even though I had never attended University of Arkansas, and I understood why, in the end, that that Fayetteville audience had responded with thunderous applause simply because Murray was in the audience.  His students and colleagues everywhere acknowledge his impact, and we remember him with respect and high regard, and with fondness, and with gratitude for all he taught us as our teacher.