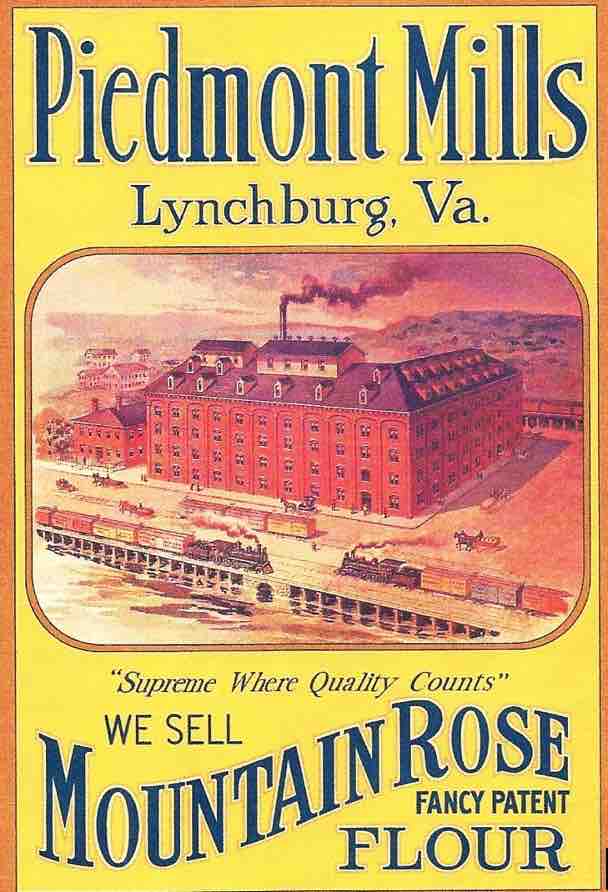 Southeast Chapter of the Society of Architectural Historians

In 1987 the National Register of Historic Places established the Lower Basin Historic District in Lynchburg, Virginia. This important nineteenth-century commercial and industrial area of Lynchburg played a major role in the manufacturing, marketing, and transportation of Central Piedmont Virginia, first with bateaux boats carrying tobacco and wheat to the port of Richmond, and later with the James River and Kanawa Canal and railroads that also carried goods to the west into the valley.  The Lower Basin was also documented in 1977 by the Historic American Engineering Record.  One of the few remaining parts of this riverfront scene is the Piedmont Flour Mill building, operating from 1875 into the 1970s. The Piedmont Flour Mill was the largest commercial structure in Lynchburg and replaced an earlier structure of the same function.  This four-and-a-half story brick building features full-height pilasters, a corbeled brick cornice, segmental arched openings, and a double row of gabled dormers. The building is the last large-scale flour mills in the area and state, and narrowly escaped demolition in the 1990s. The history of the mill was thoroughly researched and documented in a monograph by Robert Merchant in the 1990s when former workers were still available for interviews. Other visual documents are part of the Lynchburg Museum and the Jones Memorial History Library.

When new owners purchased the building in 2010, it was still condemned by the city.  In 2014 plans for this tax act project proceeded for its rehabilitation as multi-family apartments and commercial use.  In 2015 the interior work began and the five million dollar project was completed by January 2017. The entire brick exterior was restored and 70% of the interior wood elements were saved.  Original windows were restored, as were slate and metal roofs and the roof-top mechanical penthouses.  Mechanical parts from the industrial flour milling operation have been retained in some of the 55 residential apartments and in common areas. Great effort was made to retain and incorporate the interesting four-story interior silos made out of stacked 2×6 lumber.  The one and two bedroom apartments are configured to take advantage of the original building features with exposed structural beams, stacked silo walls, original floors, old mechanical parts, new appliances, and granite counter tops.  The open steel staircases throughout the building are in keeping with the industrial nature of the building and feature thick original wood from the building used as treads. The lower level contains 3,000 square feet of commercial space.  Historic photographs of the mill hang on the common area walls.  Original flour sacks found in the building are featured in a museum type exhibit case near the front entrance. The office entrance to the building features an old mill stone step and the adjacent sidewalk is a rare preservation of a cobblestone and drain surface.  On the rear of the building an open air courtyard was created for residents to use for grilling and outdoor events. The concrete silos behind the mill are also considered as future residential use.

The Piedmont Flour Mill Lofts is part of an urban renewal and preservation renaissance in downtown and riverfront Lynchburg. In the past five years the downtown area has exploded with new loft apartments, hotels,  restaurants, shops, and recreational facilities. The city has spent considerable funds creating a multi-use public park on the riverfront that hosts many festival and concert events.  The Bluff Walk connects the upper part of downtown with this public James River park area near the Piedmont Flour Mill where the public can walk and bike over an old railroad bridge to an island in the James and over a second bridge to the other side.  The Piedmont Flour Mill is one of the latest, and largest, of these urban renaissance projects that provide a visual link to the important commercial and industrial history of Lynchburg.