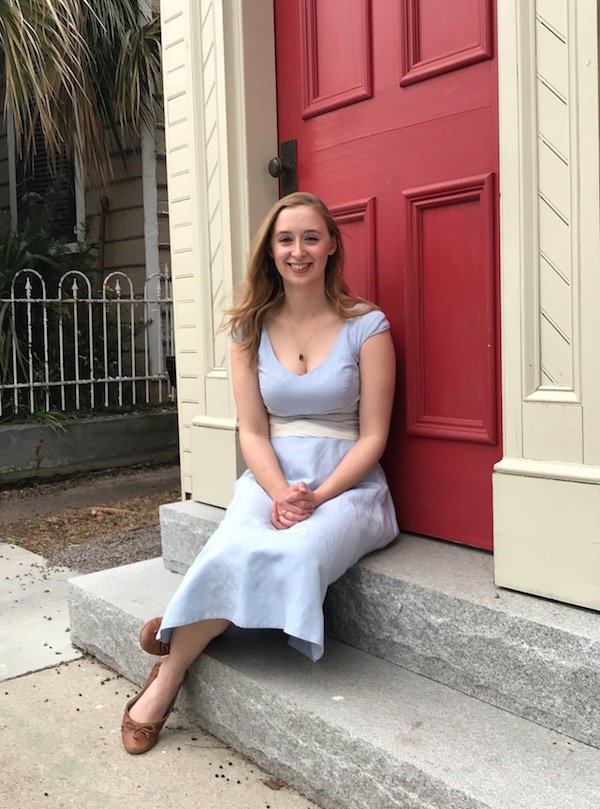 The following is an Interview with Mary Fesak (photo above), SESAH’s first recipient of its Graduate Student Research Fellowship. The Fellowship is intended to assist graduate students in architectural history or historic preservation in their thesis or dissertation work. It awards $1000 to offset research-related expenses and travel.

I’m a graduate student in the Masters of Science in Historic Preservation program offered jointly by Clemson University and the College of Charleston. The program is based in Charleston, South Carolina. I also double-majored in historic preservation and history at the University of Mary Washington in Fredericksburg, Virginia. Currently, I’m a graduate assistant with the Avery Research Center for African American History and Culture in Charleston. I have also interned with Historic Charleston Foundation, the Warren Lasch Conservation Center, Silman Associates, and the National Trust for Historic Preservation in the past. I enjoy playing the cello, fiddling, and riding my horse named Copper in my spare time.

I first became interested in historic preservation when I visited Kenmore plantation house in Fredericksburg, Virginia as an eighth grader. I had an aha moment when I saw a University of Mary Washington student conserving the decorative plaster ceiling in the dining room. I realized that I wanted to pursue a career working with historic buildings, which led me to enroll at the University of Mary Washington. I enjoyed architectural history as a historic preservation student, but I didn’t actually develop a passion for it until my senior year when I began to write my honors theses. I realized that I could combine the gender history and theory I had learned about in the history program with the more traditional architectural history I had been studying in the historic preservation program. I felt like I could gain new insights into the construct of gender and its manifestation on the built environment by taking this approach. My history thesis examined how founders Katherine Pettit, Ethel DeLong, and architect Mary Rockwell Hook’s plans for the Pine Mountain Settlement School in Harlan County, Kentucky reflected their urban, middle-class understandings of class, race, gender, and education, which they sought to impose on their students. My historic preservation thesis compared the thoroughbred breeding and training farms built by male and female owners in early-to-mid twentieth century Virginia, revealing that women took different approaches as they began to challenge the male domination of the field.

I’m researching the winter thoroughbred training facilities of Aiken and Camden, South Carolina. Both towns became winter resorts during the Gilded Age known as Winter Colonies. Wealthy northerner and midwesterner horsepeople initially came to play polo and fox hunt. They came to realize that the climate and accessibility by railroad made the towns ideal locations for winter racehorse training centers. In Camden, Harry Kirkover and Ernest Woodward redeveloped the Springdale Race Course during the late 1920s, while Marion duPont Scott constructed the Camden Training Center in 1937. A group of winter colonists built the Aiken Mile Track in 1938 and the Aiken Training Track in 1941. The construction of the training tracks in particular cemented the towns’ statuses as some of the top winter training centers for thoroughbred racehorses in the country. My research examines the vernacular building practices and design aesthetics of the training barns built on and around the racetracks. It compares approaches to farm design between the towns, as well as changes to barn and farm layouts over time. I also hope to be able to study how the equine landscapes reflected race, class, and gender hierarchies in horse racing culture.

How did you come to be interested in this topic?

My interest in this topic grew out of my undergraduate thesis on gender and Virginia’s thoroughbred breeding and training farms. I initially hoped to be able to compare women-built training farms in South Carolina and Virginia to see how gender norms in racing may have had different impacts on the ways in which women constructed their training barns. Their winter training barns in the towns had greater visibility than their rural Virginia farms. As my research progressed, I found that Marion duPont Scott was the only woman who built a training facility in Aiken or Camden. Other female racehorse owners from Virginia leased barns built by men. I thought the fact that Scott was the only woman to build training barns speaks volumes, but the lack of barns for comparison meant that I couldn’t do the study. Instead, I decided to focus on doing in-depth research on the equine landscapes and local racing cultures of Aiken and Camden.

What kinds of sources and/or methodologies will you use in your research?

My research is grounded in a combination of primary source research and field investigation. Since horse barns usually have little-to-no written documentation about their construction and subsequent use, I’m doing my best to chronicle their development through the study of deeds, plats, maps, aerial photographs, newspapers, and magazine articles. Since training outfits could be transient because they leased barns as often as they owned them, I’m also in the process of conducting oral histories with horsepeople who have been involved at the tracks for many years to gain additional insights into the histories of the barns. My research also involves site visits to the approximately 40 barns I am studying to examine construction methods, building materials, architectural style, spatial layouts, and modifications over time. As part of my analysis, I will produce sketches of floor plans based on measurements taken on-site to diagram spatial usage, changes in spatial usage over time, and additions.

What do you hope/expect to find in your research?

I hope to document the factors that shaped the equine landscapes in Aiken and Camden. Based on my current research, I expect to find that Aiken’s preexisting polo landscape influenced the form of the racing landscape. The racing landscape in Camden should make an interesting comparison because there were few polo fields and barns in the area where the tracks developed, giving the builders a blank slate. I hope to see how expectations for spatial functions in barns changed over time through modifications. I also hope to learn about patterns in women’s and minorities’ occupations of space in the barns within a culture that had a very distinct hierarchy to tell a more inclusive history of the barns.