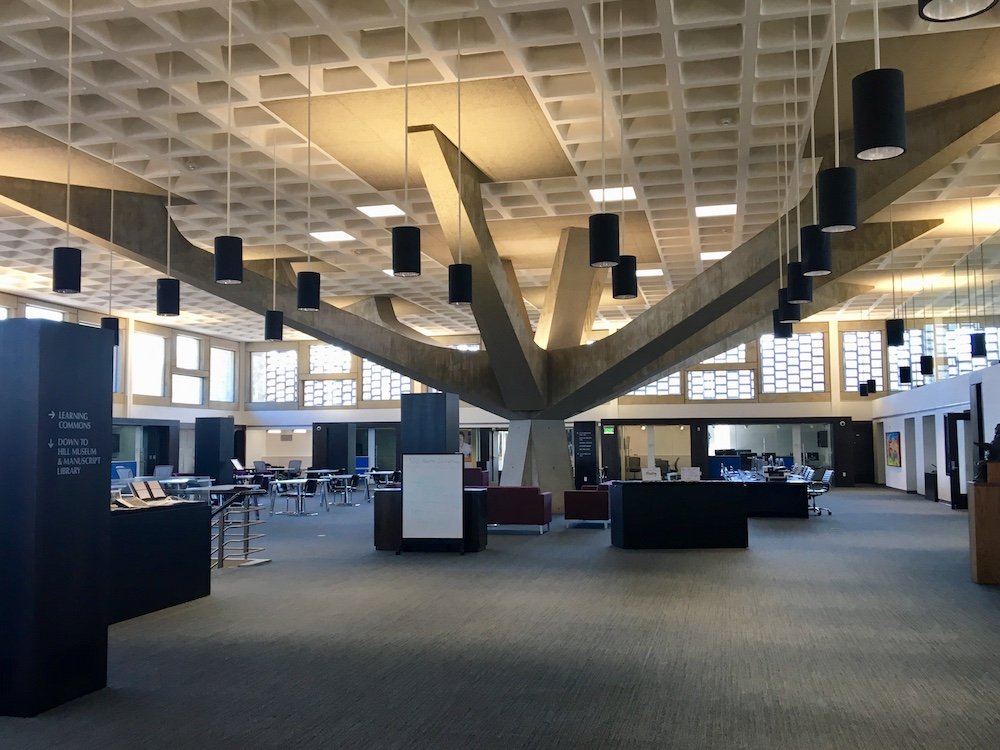 I’m sure you’ve been to SAH many times, how was this year different?

As the recipient of SESAH’s SAH Annual International Conference Fellowship, I had the fortune of attending the 71st Annual SAH International Conference in Saint Paul, Minnesota in April. Despite an unexpected snowstorm, the conference attracted a global cohort who, over the course of several days, were able to explore the architecture of the Twin Cities and attend papers sessions as well as several other workshops, meetings, and roundtables. The forty-eight paper sessions were condensed into two days (Thursday and Friday), unlike past SAH conferences that typically featured paper sessions on Saturday morning. With this adjustment, the conference accommodated two days of preconference events as well as tours on both Saturday and Sunday and the Saint Paul Seminar on Saturday. For those interested, the full program is available here.

This year, SAH was truly a global and multifaceted event, with a diversity of session speakers, ranging from those in academia to architects, conservationists, museum professionals, post-graduate students, and many others. In particular, there were a number of diverse voices, in terms of both presenters and subject matter, cultivating a more inclusive conference that went beyond canon-driven studies to examine more deeply the architectural contributions of previously-overlooked females and designers of color as well as workmen and women.

Where did you “see” the SESAH region at SAH this year (papers, etc.)?

SESAH was well-represented, through both paper topics on the architecture of the southeast and presenters from SESAH’s twelve states. With concurrent sessions, it was impossible to hear all of the fascinating papers, but a survey of the program illustrates that SESAH was certainly well represented in the Graduate Student Lightning Talks and Paper Sessions:

In addition to representing SESAH as a member and faculty member at Auburn University, I also had the privilege of presenting on behalf of the Society of Architectural Historians of Great Britain (SAHGB). I co-chaired a session entitled “The Audience for Architectural History in the 21st Century” with Dr Jonathan Kewley from the Historic Buildings and Monuments Commission for England. This collaborative session welcomed five international scholars from private architectural practice, historic preservation, museum studies, and the academy; thereby, actualizing the aspiration for a diverse panel as articulated in our initial call for papers. In conjunction with the paper session and as an extension of research endeavors through the SAHGB, Jonathan and I also led a roundtable, entitled “Essential Skills for the Architectural Historian.” Today’s historians are fortunate to have a wealth of digital resources at their fingertips, from databases to archives to documentation and dissemination tools. However, to the extent that these tools cultivate the potential of our field, they simultaneously build factions within the discipline due to technological divides in skill level as well as the price of access to select databases, hardware, and software. This session addressed the questions: (1) how does the 21st century architectural historian address these growing divisions while cultivating essential skills, in school and in practice and (2) what are the essential skills, and tools, of the architectural historian, and (3) how can academic and professional training augment these skills in practice? The conversation was lively and inquisitive, with an interesting exploration of the need for and metrics associated with evaluating the ‘professionalization’ of the architectural historian, especially due to projects associated with governmental funding, tax incentives, and private sector interests.

Did you see any good buildings while you were in Minnesota?

The SAH Awards Reception, Ceremony, and Plenary Talk at the Landmark Center was a phenomenal opportunity to explore the Richardsonian Romanesque structure by Willoughby J. Edbrooke. A restoration in the 1970s transformed the 1902 federal building into a cultural center, complete with a breathtaking four-story atrium as well as offices and exhibitions tucked into the former courtrooms.

Unable to stay for the SAH-led tour of the structures by Marcel Breuer & Associates at Saint John’s Abbey and University(1958-1961) on Sunday, I was able to take an independent excursion on Saturday with mentor, former professor, and fellow SAH conference presenter Phoebe Crisman, Associate Professor and Director of the Global Sustainability Minor at the University of Virginia. We were fortunate to have the church to ourselves on the quiet Saturday morning, allowing us to slowly and carefully explore the myriad patterns of the beton brut, the hand-painted stained glass within the honeycomb concrete structure of the sanctuary’s northern wall, and the details within trapezoidal nave and cantilevered gallery. The building is one of the most incredible examples of light and pattern that I have ever had the opportunity to see in person.

Across from the church, the concrete trees of the Alcuin Library (1964-66) created a truly serene place, transforming the waffle slab into a perforated canopy.  The recently unveiled addition and renovation condensed the stacks and transformed the space into a more fluid reading room, with the addition of a glazed series of study bays and a terrace that overlooks the pastoral surroundings of Collegeville.

Dr Danielle S. Willkens, Associate AIA, FRSA, LEED AP BD+C, is an Assistant Professor of Architecture at Auburn University’s School of Architecture, Planning and Landscape Architecture. She has practice experiences in design/build, public installations, heritage documentation, and extensive archival work in several countries. Most recently, she was the recipient of the Society of Architectural Historians’ H. Allen Brooks Travelling Fellowship. Between June 2016 and May 2017, she traveled to Iceland, the Faroe Islands, Cuba, and Japan to research the impact of tourism on cultural heritage sites. Building on time as a historical interpreter at Monticello and a Sir John Soane Museum Travelling Fellow, she pursed a PhD at UCL’s Bartlett School of Architecture and her manuscript is in development for publication with the University of Virginia Press: The Transatlantic Design Network: Jefferson, Soane, and agents of architectural exchange, 1768-1838. Thus far her research has been supported by grants from Auburn University, Sir John Soane’s Museum Foundation, the Society of Architectural Historians of Great Britain, and a Franklin Research Grant from the American Philosophical Society, as well as two short-term research fellowships from the International Center for Jefferson Studies.