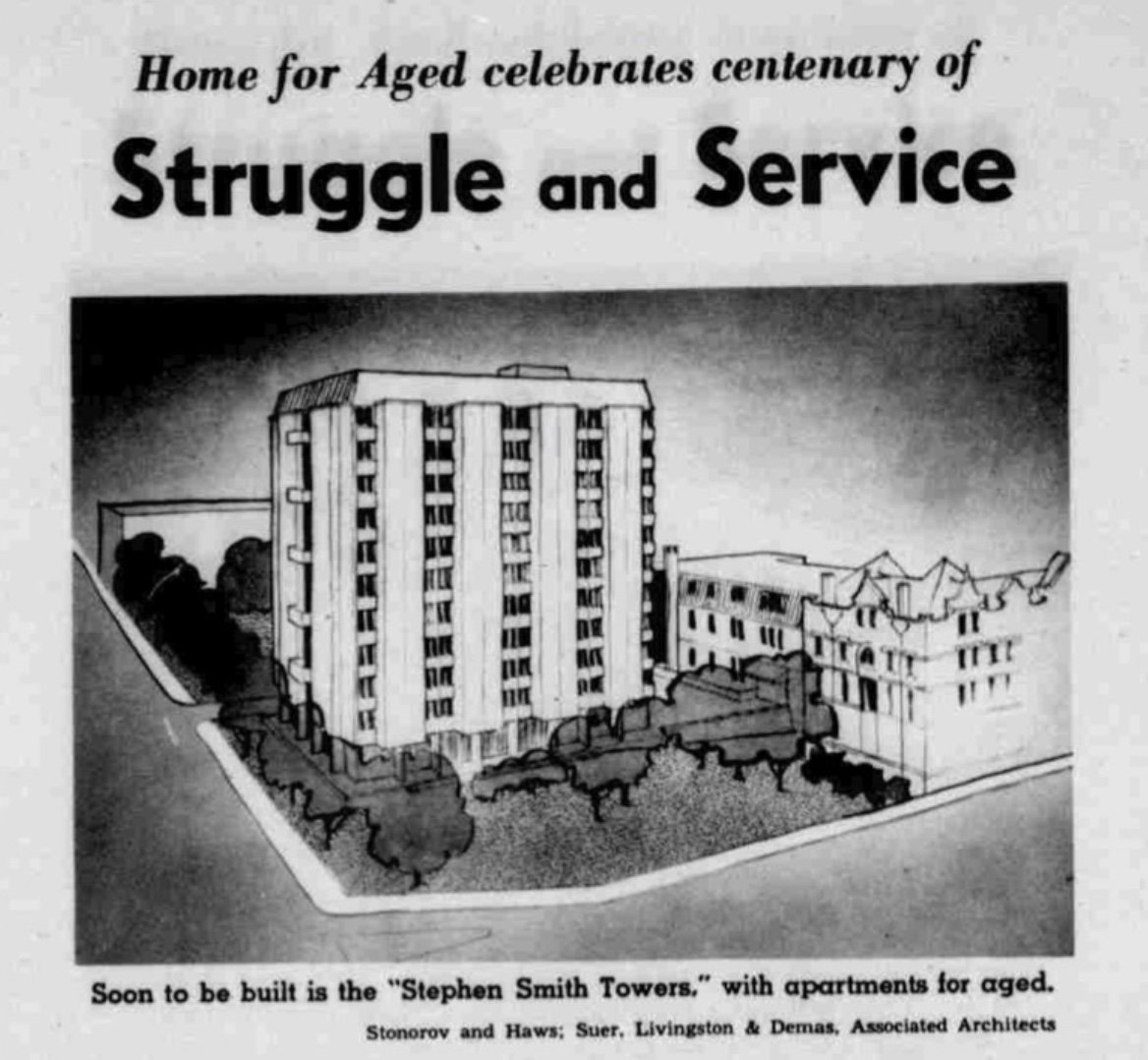 Drawing of the Stephen Smith Home's proposed "Stephen Smith Towers" project for independent older adults, promoted on the occasion of the institution's 100th anniversary. The new apartment structure is depicted adjacent to the home's original building and infirmary, both of which continued to house assistive- and nursing-care residents (Philadelphia Inquirer, April 19, 1964, page 32).

SESAH’s Graduate Student Research Fellowship supported me in the nick of time—literally, about two weeks before COVID-19 ground life to a halt in early March. I applied for this grant in order to underwrite an archival trip to the Amistad Research Center in New Orleans for my project “Eldercare at the Margins: African-American Homes for the Aged, 1940-1970.” There, bookended by Mardi Gras parades, I spent a week digging through the Hobart Jackson’s files. Renowned as the “Father of Black Gerontology,” Jackson was the longtime administrator of Philadelphia’s Stephen Smith Home, the first and longest-enduring African American nursing home in the country. Founded in 1864, well before Social Security, the Stephen Smith Home was established to shelter elderly Blacks segregated from the vast majority of White-serving “homes for the aged” (as they were once known). The institution, situated within a growing campus in West Philadelphia, flourished until the 1940s, at which point the increasing rigors of senior-care, building regulation, and the diminution of community support brought the structure, quite literally, to the brink of collapse; by the time Jackson took the helm in 1949, a wing of the Stephen Smith Home had been condemned.

As a case study, the Stephen Smith Home illustrates how African American eldercare institutions—at once critical to their community—likewise suffered the brunt of the burden in terms of the bureaucratization and regulation of senior care design. Many of the Stephen Smith Home’s peers, including the Jane Dent Home in Chicago, simply could not keep pace with the financial rigors and physical alterations required to keep “up to code.” Jackson’s role as administrator, including his later advocacy through the National Black Caucus on Aging, magnified the inequity of Black eldercare, or what he called a “double jeopardy” of being both a minority and a senior, amalgamating the power structures of racism and ageism at once. To a great degree, Jackson sought to address this double jeopardy, including the difficulty for Black seniors to access sheltered care settings, by manipulating the built environment of the Stephen Smith Home: first “fixing up” the facility through community fundraising and pro-bono rehabilitative building projects, and later by navigating new federal and state funding systems for senior housing. At the Amistad Research Center, I examined newsletters from the home, photographs, meeting minutes, in addition to Jackson’s numerous speeches, a testament to his growing concern and advocacy on behalf of minority seniors at a national level. This research has formed the fundament of my fourth dissertation chapter, an excerpt of which I will present as part of the “Architecture and Activism” panel at the 2021 Society of Architectural Historians Conference. I am grateful for SESAH’s support!