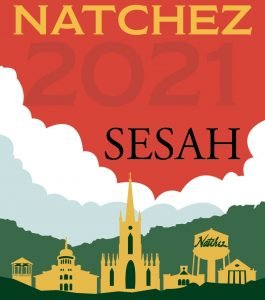 Scroll down for registration and accommodation information.

Please note: the Conference Program, including schedule and paper sessions, will be posted by August 15, 2021.

SESAH’s 39th annual conference will be held in Natchez, Mississippi. It will include two days of paper sessions and a Saturday study tour.

As the oldest permanent European settlement on the Mississippi River, founded in 1716, Natchez and its dramatic setting high atop a bluff have attracted travelers for three centuries. The city was among the richest per capita as the capital of the Deep South’s antebellum Cotton Kingdom, and scores of extravagant suburban villas still ringing the city testify to the wealth of cotton planters in the Old Southwest.

Conference attendees can stay at the conference hotel, the Natchez Grand Hotel, located downtown and right across the street from the Natchez Convention Center, where paper sessions will be held. Numerous bed and breakfast establishments can also be found both downtown and at a few of the suburban estates. Major airports nearby include Baton Rouge, LA (85 miles), Jackson, MS (125 miles), Alexandria, LA (80 miles) and New Orleans, LA (165 miles).

Early arrivers on Wednesday, September 30, can familiarize themselves with downtown on a free, self-guided walking tour on a marked trail with interpretive panels that includes sites such as the William Johnson House, a Natchez National Historical Park site built in 1841 for a free African American barber whose published diary chronicles his extraordinary rise from bondage to freedom and to a position as a respected businessman. Participants can also tour Natchez in Historic Photographs, a free gallery of historic photographs depicting life in Natchez and on the riverfront from about 1845 to 1910, located in Stratton Chapel behind First Presbyterian Church.

Friday’s awards luncheon will be held at the Carriage House restaurant at Stanton Hall, an 1857 National Historic Landmark and the most palatial of the city’s mansions. An evening reception will close out the paper sessions at Elms Court, one of the finest suburban villas in Natchez, built in 1837 and featuring a fabulous 1850s ironwork gallery.

The optional Saturday study tour will focus on the suburban villas of Natchez, built by wealthy planters as semi-rural retreats for their families. The tour will not only showcase the evolution of pre-Civil War architecture from the earliest house in the state with classical orders (Auburn, 1812) to the onion-domed Longwood (1861, architect Samuel Sloan), but will also highlight the outbuildings for the enslaved people who operated these estates, including a number of two-story brick quarters with kitchens, dairies, and privies that form rear courtyards behind the big houses.

To register for the conference, please:

The deadline to take advantage of the early-bird registration fees is September 20, 2021; after that date, a $25 late charge will be applied to all registration fees and tours. All conference attendees must be SESAH members in good standing; you can purchase or renew your memberships on our website. If you have any questions or need a receipt/invoice, please send an email to registration@sesah.org. We’re looking forward to seeing you all in Natchez, Mississippi.

2021 SESAH Conference Registration and Tour Fees are as follows:

When making reservations on the website, enter “SESAH” into the group code box in order to access the room block.  Without the code, the website will show limited availability during the time of the conference. When reserving by phone, tell the hotel that you will be attending the SESAH conference.

We also have negotiated a block of rooms at Magnolia Bluffs Casino and Hotel at 605 South Canal Street. Discounted room rates are $109.00. To make a reservation, call 601-861-4600 and let them know you’re with the SESAH Conference; the code word is “SESAH.” More information at

The draft schedule (as of 16 August 2021) for the SESAH Conference in Natchez, MS is now available. Click the image below to view or download a PDF of the schedule. We will update the schedule as the conference date approaches, so please keep checking back to see any changes. 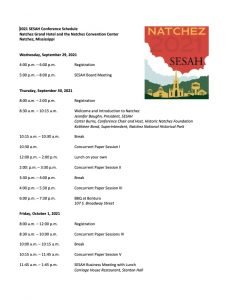 Several of you have asked about the best way to get to Natchez. Unless you own your own plane, you will probably either be flying into Jackson, New Orleans, or Baton Rouge, or driving from your home base. If coming through Jackson, you may want to take some time to visit one or both of the Two Mississippi Museums—the Mississippi Civil Rights Museum and the Museum of Mississippi History—located in downtown Jackson next door to the state archives.

My favorite drive to Natchez from Jackson is along the Natchez Trace Parkway, a National Park Service scenic drive that connects Nashville, TN to Natchez. Along the way, check out Rocky Springs, where a brick Methodist Church (1837) is the lone reminder of a once-vibrant plantation community that succumbed to the scourge of erosion that so many agricultural reformers warned about—NPS signage helps interpret the surrounding landscape. Also on the way, with a short detour at Port Gibson, is a gold hand pointing to heaven at the First Presbyterian Church, a Moorish Revival Jewish temple, the nearby Windsor Ruins, Alcorn State University—the nation’s oldest historically black land-grant university–the abandoned town of Rodney, and Mr. D’s World Famous Chicken at the Old Country Store in Lorman on Highway 61. As you get closer to Natchez on the Trace, Mount Locust (c.1780) is the only remaining “stand” or inn of the more than forty that once catered to travelers. You might also visit the Emerald Mound(1200-1750), the second-largest Mississippian Period ceremonial mound in the country, and once in Natchez, you will find the Grand Village of the Natchez Indians, a museum an 128-acre park encompassing the main ceremonial center of the Natchez Indians from 1682 to 1730.

If you’re coming from New Orleans or Baton Rouge, you may want to spend time in St. Francisville, Louisiana, a river town with close historical connections to Woodville and Natchez, Mississippi. The Myrtles, Rosedown Plantation State Historic Site, or Oakley, located within Audubon Memorial State Park, would provide good comparisons with the types of buildings you will see in Natchez. Traveling north on Highway 61, you’ll come to Woodville, the county seat of Wilkinson County, featuring one of the earliest courthouse squares in Mississippi. After walking around the square and admiring its ancient live oaks and the 1834 Office and Banking House of the West Feliciana Railroad—one of the oldest surviving railroad buildings in the country–you might also want to stop in at Showroom Antiques before heading on the Natchez, just a half hour up the road.

Early arrivers in Natchez can enjoy a self-guided walking tour of downtown Natchez on a marker trail with interpretive panels, a walk around the stunning Natchez City Cemetery, or a tour of one of the many historic houses open regularly.