THE SOUTHEAST CHAPTER OF THE SOCIETY OF ARCHITECTURAL HISTORIANS (SESAH)

Founded in 1983, the Southeast Chapter of the Society of Architectural Historians (SESAH) is a regional chapter of the national Society of Architectural Historians (SAH) and includes twelve states: Alabama, Arkansas, Florida, Georgia, Kentucky, Louisiana, Mississippi, North Carolina, South Carolina, Tennessee, Texas, and Virginia. Our members are primarily based in the southeast region, but also reside throughout the U.S. as well as internationally. All are welcome.

SESAH promotes scholarship on architecture and related subjects and serves as a forum for ideas among architectural historians, architects, preservationists, and others involved in professions related to the built environment. Every year, we hold a conference, publish a journal, offer funding for conference travel and research, and give awards that recognize achievements in scholarly publication as well as preservation practice.

Our annual peer-reviewed journal Arris launched in 1989; beginning in 2019, we began publishing it in partnership with the University of North Carolina Press in Chapel Hill.

SESAH was formally incorporated as a 501(c)(3) nonprofit organization in Arkansas in 1992 and currently maintains financial offices in Tennessee. For information on making a financial donation to SESAH see this page or contact treasurer@sesah.org.

An archive for SESAH was established in 2011 at the Georgia Institute of Technology, Atlanta, in its Archives and Special Collections Library. In 2020, the archive completed work on a finding aid for the material, which dates primarily from before 2011. A full run of Arris can be found in the collection.

The archive continues to accept materials, both paper and electronic, related to SESAH.  To inquire about donating such material to the archive, contact secretary@sesah.org.

The Southeast Chapter of the Society of Architectural Historians (SESAH) was founded in 1983 in Atlanta with art historian John Howett of Emory University serving as acting president and Georgia Tech hosting the first annual meeting. Emory faculty presented five papers on classical/European architecture topics and Robert Craig chaired a regional American session of five papers on the architecture of the southeast. In his introductory remarks, Craig observed that “It is now time” for architectural historians in the region to establish the new academic society in order to document the architecture of the southeast, while welcoming serious research on architecture of all historic periods, nations, and cultures. The keynote speaker of that first SESAH meeting was William L. MacDonald, (formerly A. P. Brown Professor of Art History, Smith College) on the topic “Connection and Passage in North African Architecture.”

From the start, the “local” SESAH chapter was not bound to Atlanta but regional, and intentionally differed from most chapters of SAH which remained headquartered in, and served, a single city and local community. Five states formed the first SESAH: Georgia, Tennessee, Florida, North Carolina, and South Carolina. At the inaugural Atlanta conference, medievalist Francois Boucher invited the newly formed chapter to hold its second “annual” conference in Tallahassee, and was elected SESAH’s 1984 president in order to bring that to fruition. By the time of the second conference, interest in joining the new chapter was expressed in Alabama and representatives from Mississippi and Virginia specifically appealed to be admitted formally as a SESAH state. Boucher solicited the assistance of Rob Craig to address issues of defining the region and admitting new states, as well as to establish the administrative structure for SESAH governance. Inquiries were made regarding existing local chapters in the southeastern states, and only two existed in the region: an inactive Louisiana chapter in New Orleans, and a student chapter at the University of Virginia that was the time only irregularly active. By the time SESAH met for its second annual meeting, Craig had formalized the process of admitting new states, drafted a constitution, and established a board of directors of state representatives (whose character has essentially remained to this day) as well as a dues structure. Moreover, a model was set for coordinating and co-sponsoring keynote speakers: a host institution or a local organization’s lecture program covered a keynote fee/honorarium and travel expenses, while SESAH provided an eager professional audience.

SESAH’s administrative structure was modeled on the Southeastern College Art Conference, a “sister” regional organization (affiliate of the College Art Association), of which Craig was a member. Some early SESAH conferences were joint meetings with SECAC, an arrangement that further aided the financial establishment of the fledgling SESAH. For the board of directors, the new constitution established that each member state would have an elected representative of that state on the SESAH board, and an “at large” member would be added. By the time of the second annual meeting, there were sixty-two paid members in the chapter and a board of directors of fifteen members was established. In Tallahassee, Craig was elected president for the society’s third year, and charged with putting all this in place. The SESAH constitution was adopted, and the society was now comprised of eight states (Georgia, Tennessee, Florida, South Carolina, North Carolina, Alabama, Mississippi, and Virginia). By 1986, a model formal application, signed by scholars and professional and academic organizations from Arkansas, prompted SESAH to add Arkansas as its ninth official state. Dean C. Murray Smart, who spearheaded this addition, also coordinated the legal work enabling SESAH to become incorporated in Arkansas and to secure the society’s 501(c)3 not-for-profit status. Soon after Arkansas officially joined SESAH, Louisiana and Kentucky were formally added, and when Texas joined in 2005 as the twelfth state, the regional chapter reached its current extent. All twelve states have hosted at least one annual meeting.

Rob Craig, having served as president and annual meeting chair in 1985, was then elected treasurer in 1986, accepting a mandate to secure and maintain the chapter’s financial stability; he continued in that role for twenty-four years until his retirement from Georgia Tech in 2011. A primary mandate was that conference budgets were established and maintained independently with the requirement that each annual conference was to pay for itself and while SESAH could obviously cover any loss, it was expected that expenses would be covered by conference income from registration fees and any surplus/profit would accrue to SESAH. During Craig’s long tenure as treasurer, he worked to maintain the solvency of the fledgling chapter, to establish and grow a small endowment, and to develop only those programs and practices that the chapter could afford.

This effort was significantly aided by annual donations from an anonymous donor whose contributions targeted specific programs which thrive today in large part due to this assistance.  When Marian Moffett and Lawrence Wodehouse inaugurated Arris, the society’s annual scholarly print journal (volume 1 was 1989), SESAH’s donor provided $1,400 annually to help pay for it. When the topic of student travel grants came under discussion, the donor provided an additional $800 annually to fund two of them, requesting that the chapter fund a third annually (as applications warranted). The donor then discussed with the treasurer the desirability of the chapter’s publishing abstracts of annual conference papers, the donor advocating three reasons for providing such: to aid conferees’ decisions in selecting papers to attend when concurrent paper sessions were scheduled, to provide abstracts for absentee members unable to attend the annual meeting, and to provide a permanent record of the paper content presented. The donor then added $200 to the annual gift in order to cover the cost of printing the abstracts. Thus, for many formative years, SESAH benefited from an annual donation of $2,400 to guide the establishment and help underwrite our programs. Other funds from dues were thus freed up and in 1995 the treasurer recommended, and the board adopted, an annual donation to SAH’s Buildings of the United States publication series program, the first three grants going to the two Virginia volumes and to Louisiana. Early gifts of $250 were quickly increased to $500 annually, to be dedicated to books covering one of the states in our official region, later expanded to any BUS book in greatest need, as determined by the BUS editor.

Thus, SESAH established the three pillars of its mission in support of regional scholarship in southeastern architectural history. The first pillar is Arris, our chapter’s annual scholarly print journal, and during the three decades since volume 1 was published in 1989, Arris has regularly published essays and book reviews on southeastern, national, and international topics of architectural history. The second pillar is our annual conference which includes the presentation of scholarly papers, an awards program recognizing excellence in book and essay publication as well as preservation projects, architectural tours of cities and historic sites throughout the southeast region, and student travel grants to enable beginning scholars to attend our annual conference and (recently inaugurated) to attend the national SAH conference. Co-sponsorship with host institutions of the annual keynote lecture at the SESAH conference has attracted scholars of international reputation, including in the first ten years alone, William MacDonald, Michael Graves, Stanford Anderson, P. Reyner Banham, John Vlach, Dell Upton, Kurt Forster, Robert Mark, and William Jordy. More recently SESAH annual meetings have hosted keynoters Alan Gowans, James Ackerman, Damie Stillman, Andres Duany, Richard Guy Wilson, Allen Greenberg, John Reps, Kenneth Jackson, Robert Ivy, Fekret Yegul, Witold Rybczynski, and Gwendolyn Wright, among others. Ours is clearly no provincial outpost of scholarship. Finally, the third pillar is the support from SESAH over a quarter of century of the national architectural history project of our parent society, SAH: the Buildings of the United States series (University of Virginia Press). To date, SESAH has donated over $15,000 to help underwrite individual BUS books. Our SESAH members are BUS and Archipedia authors, and several southeast volumes have already been published including two books covering Virginia, one each for Louisiana and Arkansas, city guides to Savannah and New Orleans, and two Texas volumes.

Beyond the southeast region, our members and authors have contributed monographs and textbooks of architectural history that extend our subjects of interest to global content, most notably Marion Moffett, Michael Fazio, and Lawrence Wodehouse’s Buildings Across Time: An Introduction to World Architecture (first edition 2004, fifth revised edition 2019), a comprehensive tome that has served as a textbook in our field for tens of thousands of students. 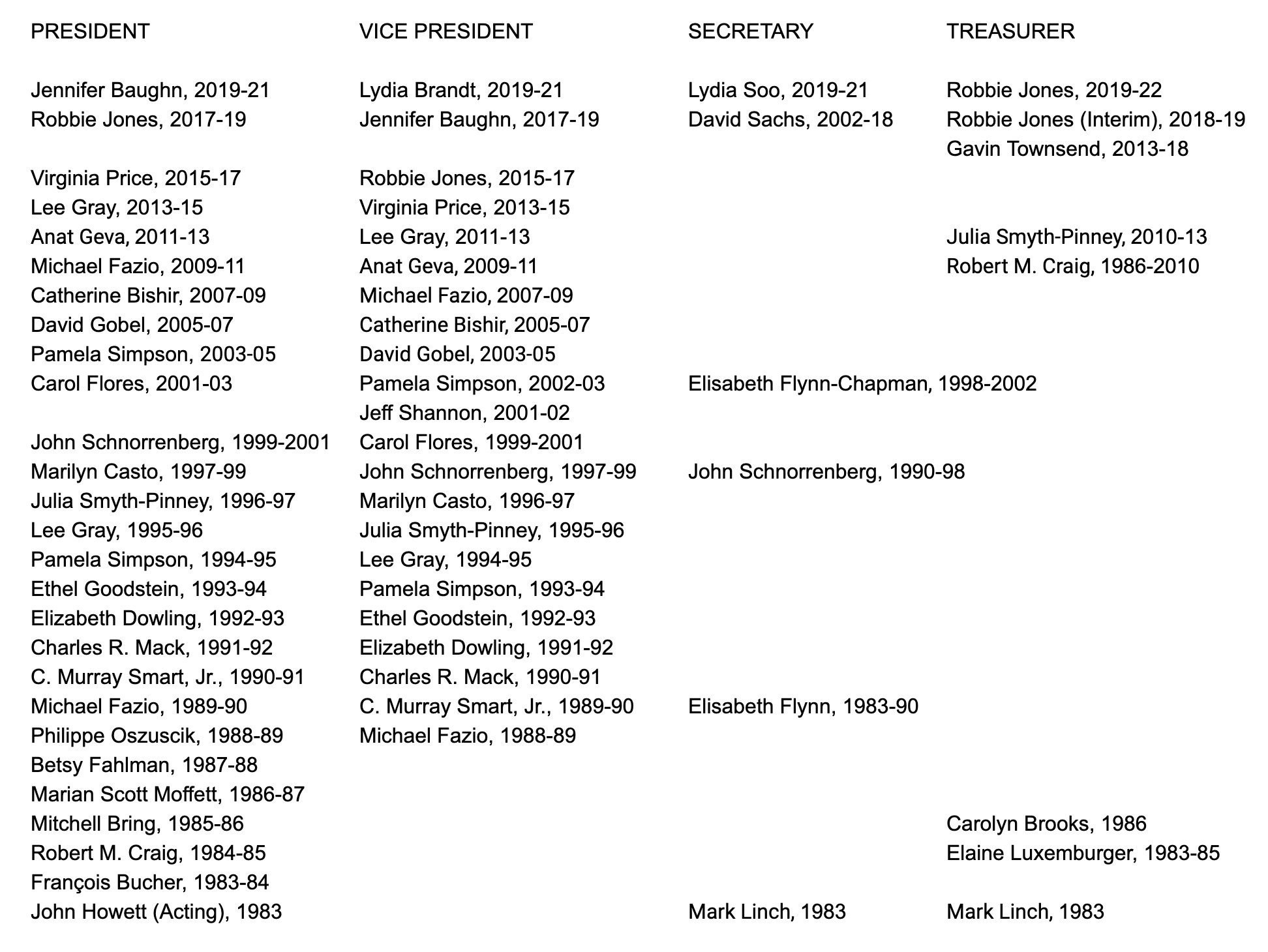